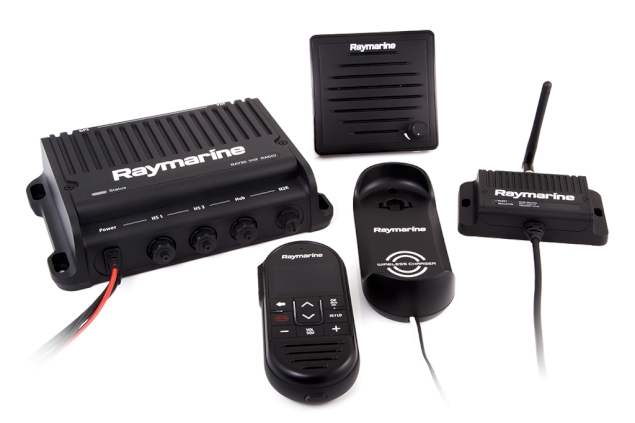 Traditional marine VHF radios keep users confined to the helm with their short handset coil-cords that limit the ability to move about. Raymarine’s new Ray90 and Ray91 modular VHF radios give the freedom to roam and communicate from anywhere onboard using optional wireless handset stations.
The versatile Ray90 and Ray91 modular radios offer the convenience of having two wired handsets and three optional wireless handset stations. Wired or wireless, users will have full access and control of every feature the high-performance VHF radios have to offer.
Both models feature a powerful, commercial-grade marine VHF radio transceiver with the latest Class-D Digital Selective Calling for convenience and safety. The Ray90 and Ray91 are also equipped with a built-in loudhailer and fog-signal generator that can be easily activated by adding an optional hailing horn accessory. In addition to ship-to-shore and ship-to-ship calling, the Ray90/91 offer onboard intercom communications. The radio’s intercom feature can be used to make internal calls from station to station.
The Ray 91 model also has a built-in Class B AIS receiver. By connecting the Ray91 to the boat’s multifunction display and instrument network, users can see the position and identity of nearby AIS-equipped vessels.
Simple Options for Expansion
The basic Ray90 or Ray91 system comes with a black-box transceiver module and a wired handset/speaker kit. The transceiver module hides out-of-sight and offers connections for an optional second wired station as well as a wireless hub. The wireless hub allows the Ray90/91 to host up to three wireless handset stations. Wireless technology is the ideal solution for adding VHF radio capability in hard-to-wire locations like tuna towers, flybridges or distant cockpits.
Wireless handsets are powered by built-in lithium-ion rechargeable batteries for long life. The wireless handsets use the latest inductive charging technology. The handset can simply be placed back in its supplied dock; there are no charging ports, contacts, or unsightly cables. Each wireless handset also has a convenient locator alarm to help find it should it be misplaced onboard. By triggering the handset finder from any other station, the lost device will cry-out to be found.
Compliant with the latest regulations for DSC-equipped radios, both Ray90 and Ray91have an onboard GPS receiver and a connection for an external GPS antenna. The radios can communicate with other onboard multifunction displays and instruments using industry-standard NMEA2000 or NMEA0183 networking.
The Ray90, Ray91 and their wired and wireless accessories are available now from Raymarine dealers around the world.